“No” is one of the shortest and scariest words in the English language, especially if you ask any salesperson. In business, this one word can shatter many dreams, but it can actually do the opposite by creating new opportunities.

What you should do is reframe rejection and see how you can benefit from this seemingly worst-case scenario. It’s important to understand that it’s not the end of the world, let alone your conversation with the prospect. Turning every no into a yes in sales is a must.

In other words, salespeople should take every “no” as a challenge and find a way to benefit from it and turn it into a “yes.”

Here are some ideas on how to handle rejection in sales that are the result of my 15-year sales experience.

Over the years I’ve learned that many times when a client says no or a potential deal falls through, it’s mainly because the buyer has not understood the product, service, or its benefits.

No matter what the reason is, you should be professional and don’t behave as if you are offended.

Respect the time your prospect dedicated to your offer, demo, and presentation, and thank them for that.

Another thing to bear in mind is that this no can be just a temporary decision, which means that you shouldn’t burn your bridges.

Tip #2 – Don’t Be Consumed With Self-Doubt

Rejection happens even to the best of us, so do yourself a favor and don’t beat yourself about it.

Salespeople hear “no” on a regular basis, which means that you need to learn how to deal with it without allowing a negative reply to suck the life out of you.

Try to desensitize yourself to “no” as otherwise, you’ll lose all your self-confidence which is, as you know, one of the most important traits in a salesperson.

One of the best ways to do that is by not taking the negative feedback personally – the fact that your prospect hasn’t accepted your offer doesn’t mean that your next sales pitch is also doomed.

Besides, there are different reasons why they decided to say no to your proposal, so make sure to be prepared to deal with all kinds of objections and overcome them.

Many times we let our egos get in the way and miss a very important lesson.

So, instead of sulking, you should try to figure out what the problem is.

Sometimes it’s much easier to say no instead of “I’m not sure” or “I can’t give you an answer at this moment.”

Other things that might affect your prospect’s decision might be their budget, the lack of authority to make a decision or something else that you can’t even guess.

That’s why it’s essential to be straightforward and ask them why they have given up on your offer.

If you listen to them carefully, you’ll be able to learn a valuable lesson that you can later use when crafting your sales pitches.

Depending on what your prospect says, you can even ask whether it’s possible for you to reach out in the future – for example, if your product or service doesn’t have a feature that they need, or if they currently don’t have a budget for your product.

It’s a good idea to offer them to drop a line once you upgrade your product so that it meets their requirements or follow up in the next quarter when their financial situation improves.

If you get no a lot, then maybe you’re doing something wrong.

Even if that’s the case, there’s no need to panic, because you can fix your approach.

Go through your sales pitch and revisit your sales presentation to see if there’s something that should be improved or changed.

Some of the culprits behind your being rejected a lot might be the following:

Tip #5 – Know Your Strengths and Weaknesses

Nobody’s perfect, and that’s something that we should come to terms with.

But you don’t have to be perfect in order to elicit that “yes” and close your deal – you only have to identify your strengths and make the most of them.

Even if you’re not a natural when it comes to giving a speech, you can still polish your skills.

For example, you can practice your pitch in front of the mirror or you can ask a coworker to be your audience. By seeing how your facial expressions and body language change during your presentation will help you gain better control of all these aspects.

Another good idea is practicing on low-value deals, as that way you’ll take the pressure off and find your feet. Also, a good way to get to know your strengths and weaknesses is to do a SWOT analysis.

After a period of fake-it-until-you-make-it, you’ll realize that you’re more self-confident and ready to take on high-stakes prospects.

This clever move will put you ahead of the curve and catch your prospects off guard.

Namely, instead of waiting for them to bring up a certain objection, you should be the one to mention it first. This way you’ll be in control of the conversation which will allow you to steer it towards a yes.

Use your previous experiences to predict what the objection might be, and handle it in advance before your prospect even perceives it as an issue.

For example, if pricing is something that a lot of your prospects complain about, you should find a way to incorporate a narrative about why this price is justified so that this particular prospect doesn’t even think about grumbling that what you want to charge them is too high.

I’m not implying that you argue with your prospects and try to convince them that you’re wrong.

Even though you’re polite and considerate, your choice of words should be very careful and spot-on.

It’s all about nuances – instead of using “but,” side with your prospect’s opinion by using “and.”

Psychologically speaking, “but” creates some kind of conflict, while “and” makes room for cooperation and positive outcomes. I know you might be thinking that I’m nitpicking, but let’s not forget that the devil is in the details.

When you’re pitching to your prospects, it’s essential that both your message and the words you use express the right sentiment so that you’re perceived as helpful and friendly. “But” can have a certain undertone that can make you come off as too pushy and invested in your own agenda only. And that’s not a good sign.

For example, if you’re trying to sell a costly new product, and your prospect clearly has a problem with their budget, it’s not a good idea to say: “but, this product has the potential to help you make more money and cut your other costs!”

Don’t contradict your prospect when they say that they’re strapped for cash. It’s much better to say something along the lines “I understand that and that’s the reason why I’m suggesting this product as it can help you cut costs as well as bring back your investment (and even more) in the first 3 months.”

Don’t give up after the first “no,” as maybe it won’t be a definitive rejection of your pitch.

For example, if you get “We’re bound by a contract already,” could possibly not be a final rejection. Use this opportunity to ask what solution they’re using and when the contract will end. By asking such a question you’ll be able to gain valuable insight into your prospect’s situation and figure out how to push your agenda.

The trick is in laying the groundwork for rekindling your relationship in the future. If you find out when your prospect’s existing contract is up, tell them you’ll reach out then.

However, don’t disappear completely from their radar until that moment. Get in touch with them on LinkedIn, via email newsletters, and other channels. Comment on their posts and share the content you believe will appeal to them.

All this will keep you close to them and help you boost engagement until they’re ready to purchase.

Tip #9 – Understand When It’s Time to Move On

No matter how much you try and prepare for your presentation, sometimes a prospect just isn’t right – or the moment isn’t right for them to purchase.

And that’s OK. You shouldn’t beat yourself up or feel like a failure.

The trick is to get over it and stop wasting your time on something that’s clearly not going to happen.

And you’re right. I’m telling you that sometimes it’s perfectly fine to say goodbye to your prospect. If you don’t hear from someone after 30 days, that opportunity is probably dead.

The best part is that you’re not simply walking away from that prospect – you can try and re-engage them after a certain period of time, but with a new offer. Many things can change within that time frame: their budget might increase, and the timing might be right. So, when you approach that prospect again, start from square one, meaning that Discover should be the first phase.

Being rejected is hard, but as a salesperson, you have to get used to it. However, this doesn’t mean that you should wave the white flag right away and wallow in self-despair and pity. These 9 easy tips can help you win over even the most reluctant prospect and transform a potential failure into an opportunity. 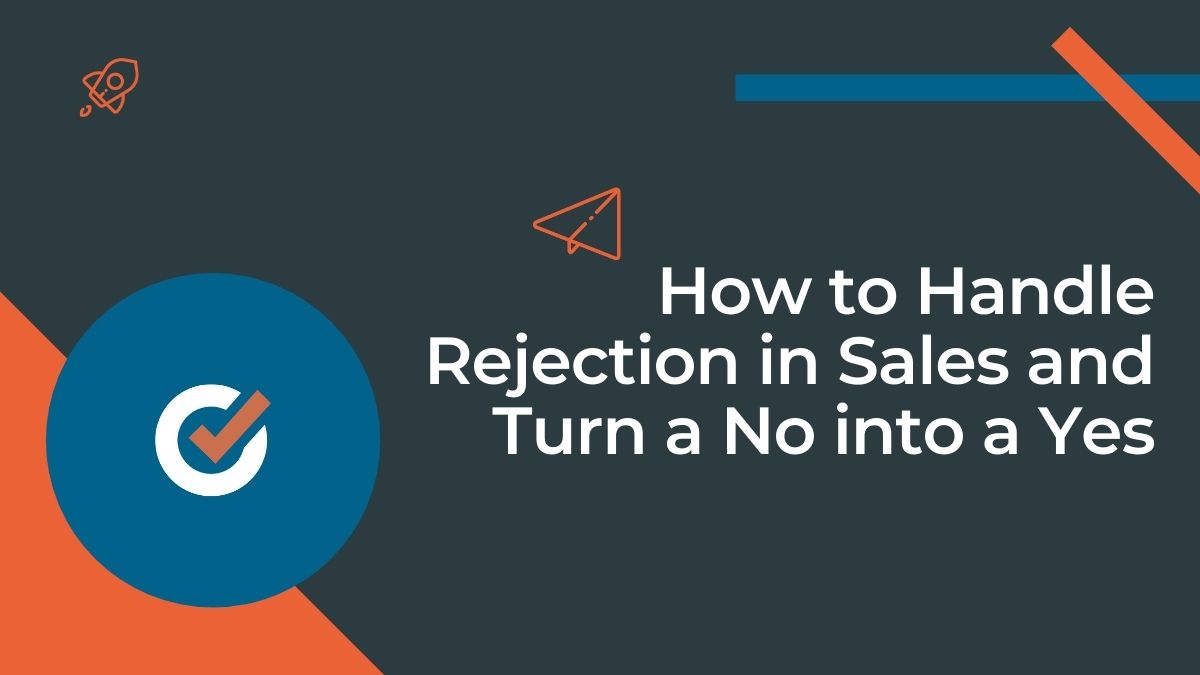